Ready to make your voice heard?
REGISTER TO VOTE 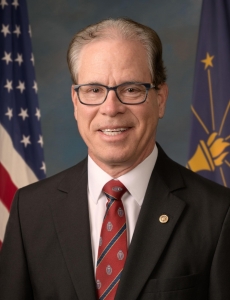 Mike Braun is honored to represent the state of Indiana in the U.S. Senate. Mike is a conservative who is proud to work with President Donald Trump and Vice President Mike Pence in creating jobs, building a strong national defense, reducing the debt and deficit and helping our veterans.

Before Braun’s historic victory in 2018, he was the founder and CEO of Meyer Distributing, a company he built in his hometown of Jasper that employs hundreds of Americans across the country.

After graduation, Mike took a different path than many of his classmates and moved back to Jasper to start his career. In 1979, he co-founded Crystal Farms, Inc. which later became one of the largest turkey operations in the Midwest.

After starting at Meyer Body Company in 1981 and eventually acquiring full ownership, Mike transitioned from the manufacturing sector to the distribution markets, forming Meyer Distributing. Since then, Meyer has grown to be among the industry leaders in auto parts distribution. Under Mike’s leadership, Meyer survived the 2008 financial collapse and came out a stronger company, averaging 22 percent growth since 2009.

Today, Meyer is a nationwide contender in the third-party logistics business. Throughout the massive expansion of his business, Mike has always remained grounded to his roots by anchoring the company in Jasper. Mike is proud of his decision to build his businesses in his hometown, and today three of his four children work in the family business.

Throughout the years, Mike has always looked for ways to give back to his community and serve his fellow Hoosiers, such as serving as a member of the local School Board and as a State Representative in 2014. Mike is an avid outdoorsman and enthusiastic mushroom hunter every spring.

As a State Representative, Mike has partnered with conservative leaders like Vice President Mike Pence to deliver results for Hoosiers. The 2016 Indiana General Assembly was ranked as the most conservative legislative body in the country.